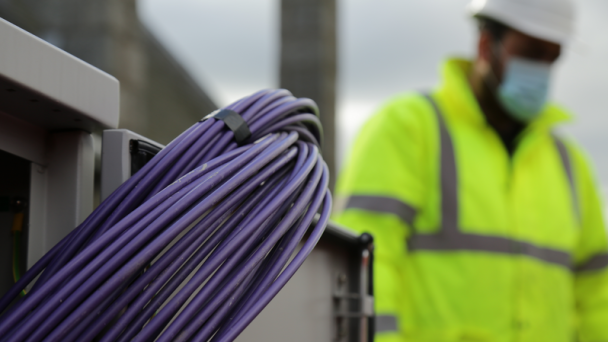 CityFibre has now laid more than 500km of full fibre beneath the streets of Renfrewshire as part of its £40m plan to future-proof the city’s digital connectivity.

The work has been completed by CityFibre’s build partner PMK across large sections of Renfrewshire from Barshaw and Ralston in the east to Linwood and Johnstone in the west.

A section of the build which began in Renfrewshire on the south side of the River Clyde now stretches east beyond the Renfrewshire and Glasgow boundary into Cardonald and Mosspark, where it will meet up with the network that has been laid in the south east of the City and is now moving south into East Renfrewshire.

Area Manager David Cannon said: “We have been working in Renfrewshire for more than two years, and the fact that the full fibre infrastructure we have laid could stretch the distance from Renfrewshire to London highlights how much work has been complete."

In Renfrewshire, services are available via Vodafone, BrawBand, Brillband, TalkTalk, Zen and Zybre, with other providers expected to join the network soon.

The Rt Hon Natalie Elphicke OBE MP visited Openreach engineers in Deal, Kent, where the network now passes over 75% of premises in the exchange area.

Tom Tugendhat, MP for Tonbridge and Malling, visited Openreach’s network build in Edenbridge which has passed 20,000 homes and businesses in the local area.

Zzoomm’s fibre network has passed 100,000 ready for service properties across 29 locations in its latest milestone.

Quickline has added 20 communities to its rollout in the last eight months, with its network now passing 10,000 homes and businesses across North Yorkshire and Lincolnshire.

Broadband operators should use existing infrastructure when providing fibre upgrades in the wake of the Telecommunications Infrastructure (Leasehold Property) Act (TILPA), says InCoax.

Truespeed plans to double network in 2023

Truespeed took its cumulative network to 60,000 properties passed in 2022 and has now connected 13,00 customers. The Bath-based altnet plans to double these figures by 2024.

Vfast Internet, part of Orbital Group has signed up its 15,000th customer. MD Rebecca Brown attributes the growth to partnerships with OFNL and CityFibre.

Neos Networks is now better placed to serve the public sector after being named as a supplier on Crown Commercial Service’s G-Cloud 13 framework.

Lit Fibre is expanding its network to cover an additional 60,000 homes across Watford and 30,000 homes in Basildon.

We and our partners store and/or access information on a device, such as unique IDs in cookies to process personal data. You may accept or manage your choices by clicking below or at any time in the privacy policy page. These choices will be signaled to our partners and will not affect browsing data.

We and our partners process data to: